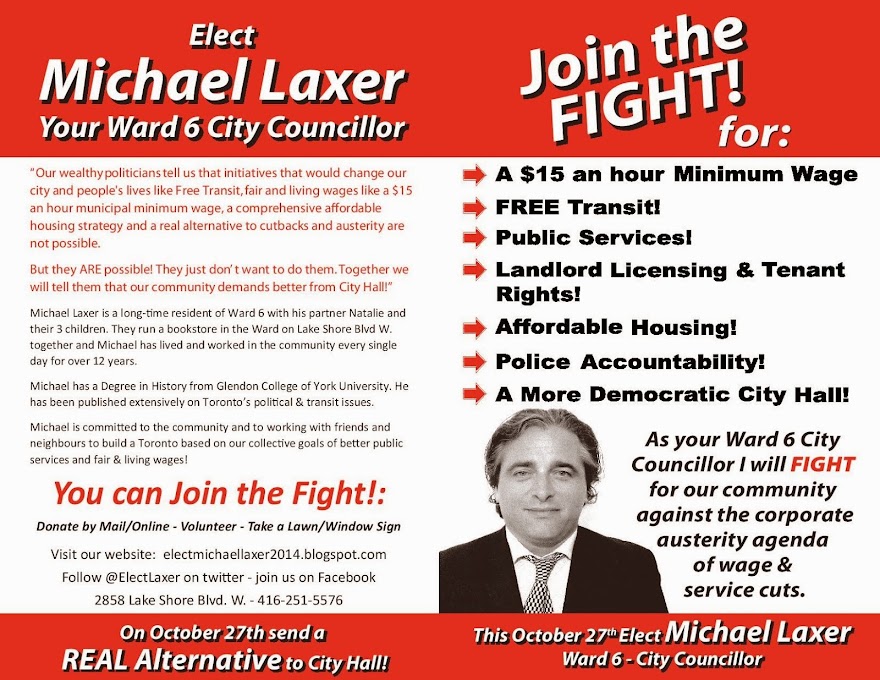 This past Sunday I was in the Toronto Star standing up against the "dangerous logic" of so-called strategic voting:

"Michael Laxer, a self-described socialist candidate running in Etobiocke’s Ward 6, is also disturbed that voters, especially those inclined to support Olivia Chow, now plan to vote for John Tory because recent polls place him as the frontrunner.

“John Tory has become the strategic, all embodying alternative to Doug and Rob Ford(open Rob Ford's policard). He’s seen as the person you have to vote for if your apparent objective is to stop the Fords and their agenda,” Laxer said.
But Laxer says there is a “dangerous logic” in strategic voting for those wanting a progressive alternative to the Ford brothers when Tory’s politics are not all that much different — minus what Tory refers to as the “chaos and division.”
“John Tory is presenting himself now as a centrist, but he’s not. He was the head of the Conservative Party. He is blue-blood Bay Street as it gets,” Laxer said. “He is the embodiment of the corporate and right-wing agenda in Toronto and I believe he will be a very strong, fierce and very effective opponent of unions, workers and public services and programs in the city.”
You can read the full article here: http://www.thestar.com/news/city_hall/toronto2014election/2014/10/19/strategic_voting_a_troubling_factor_in_torontos_race_for_mayor.html#
This interview was based around an article I wrote for rabble.ca on why strategic voting is not just wrong in this case, but generally:
"Voting for John Tory means enabling the very worst logic of "strategic voting". The liberal "left" has brought this on itself by its embrace of the logic of getting "better" people elected "strategically", and the sheer anti-democratic stupidity of the idea is now being proven.
The false, dangerous and profoundly self-defeating idea that voters should be "realistic" and embrace the "best" alternative to the worst option is coming back to haunt the many among the Liberals and New Democrats who have so often and so misguidedly advocated for it in different circumstances when it seemed to their benefit.
It is an idea that has empowered the right and facilitated the left's defeat.
Now that "strategic voting" is being used to advocate John Tory's election, one hopes that the cynical notion itself will be abandoned.
Realism in the electoral arena is a game the left simply cannot win, as Chow's campaign has again shown. There will always be a more "realistic" option.
Perhaps it is time to once and for all abandon the right wing farce of "realism" and start to actually advocate openly and avowedly for the principles we allegedly believe in."
You can read the entire piece here: http://rabble.ca/blogs/bloggers/michael-laxer/2014/10/john-tory-and-dangerous-logic-strategic-voting
Strategic voting...it is ALWAYS a mistake!